Founded by Junipero Serra in 1776 and named after an Italian saint, San Giovanni di Capistrano (John of Capistrano), Mission San Juan Capistrano was the seventh of 21 missions established by the Spanish in California to expand the territorial boundaries of Spain and share the country’s faith, tools, and resources with native Californians. Over the years the mission began to decline due to the spread of disease and a lack of available resources, and ownership of the land the mission was built on transferred until 1865 when President Abraham Lincoln returned mission buildings to the Catholic Church.

Mission San Juan Capistrano, one of the most significant historic sites in Orange County, now acts as a destination for learning, worship, and preserves an important part of California’s history. Home to different religious and historic events that take place throughout the year, the mission is best known for the annual “Return of the Swallows”, observed March 19. Restoration projects have taken place over the years to help preserve and restore the buildings and art at the mission so that generations of people can continue to remember and learn about this significant part of California’s history.

Due to an earthquake in 1812, the Great Stone Church collapsed, but Ruins of the church still remain. To illuminate this stunning historical architecture of the remaining structure, small scale aperture Bulletto fixtures were mounted to an existing power location at the top of the architectural capital. The sanctuary is approximately 120 feet wide by 100 feet tall and only four Bulletto flood optic fixtures with a center beam candela of just under 3,000 cd/klm were used to illuminate the entire sanctuary opening with throw distances of approximately 60 to 80ft.

When looking at the lumen capacity of the Bulletto Mini and Bulletto fixtures, the lighting designer was surprised to see how bright the fixtures were due to the intensity of the center beam candela. Nearly every throw distance throughout the space is between 50 to 70 feet. The power of Bulletto Mini’s center beam candela is seen throughout the project, especially at the Swallows Reenactment Experiment Wall. Four Bulletto Mini fixtures with a center beam candela of 5,624 cd/klm were used to light the entire wall. The ability to have so much power and light from such a small fixture allows large spaces to be lit without disturbing the aesthetics of the space. The compact aperture and scale of the Bulletto range allows it to blend into the natural landscape and hardscape, especially important within historical applications.

“It was irrelevant to survey the lumens because the center beam candle power of these small accent fixtures exceeds typical understanding of delivered lumens – the lumens could project false impressions of the fixture’s true capabilities. Once confirmed in our calculations and the mock-up efforts, it was evident that the small fixture’s output eclipses standard lumen output for an outdoor-rated accent luminaire.” 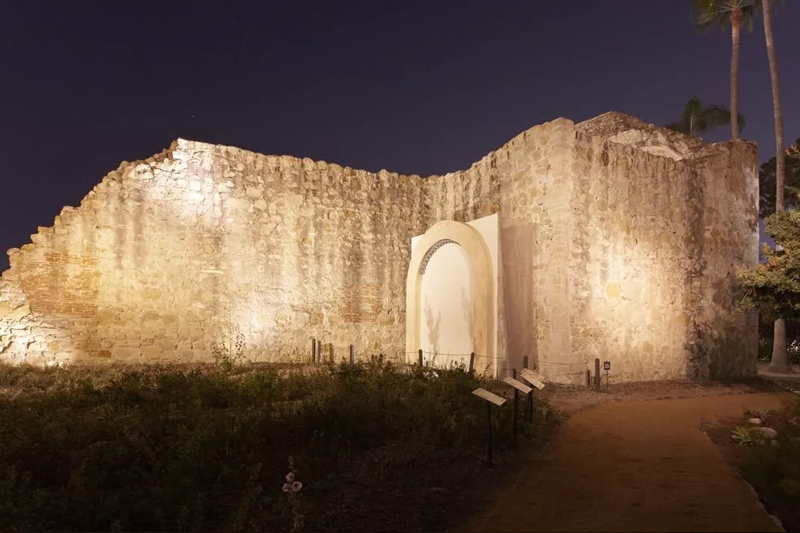 “Another design asset is the aperture size: they’re minuscule, and, since the fixture itself is small, the sight of mechanical objects, such as a light fixture in this ancient architectural and organic environment, is visually insignificant. The overall grand scale of the Ruins and its environment conveniently allows for the fixture’s presence to recede into the natural landscape and hardscape.”

The Bulletto series offers a collimating optical system with specific interchangeable holographic lenses in various optics (Narrow Spot, Spot, Flood, Medium Flood, and Medium Wide Flood) for a simple, toolless field interchangeability of optics and accessories, while still maintaining the IP66 rating of the fixture. Throughout most of the application, both Flood and Medium Wide Flood optics were used to sculpt the Ruins and mission facade. To bring more attention to the bells on the Bell Wall, or Campanario, a Spot optic was used in each of the four Bulletto Mini fixtures in order to allow the fixtures to light the bells without creating a glaring spill light into the adjacent patron pathways. Another way to avoid unwanted spill illumination of nearby paths and features was to purposefully aim many of the fixtures to illuminate accent target areas throughout the Ruins 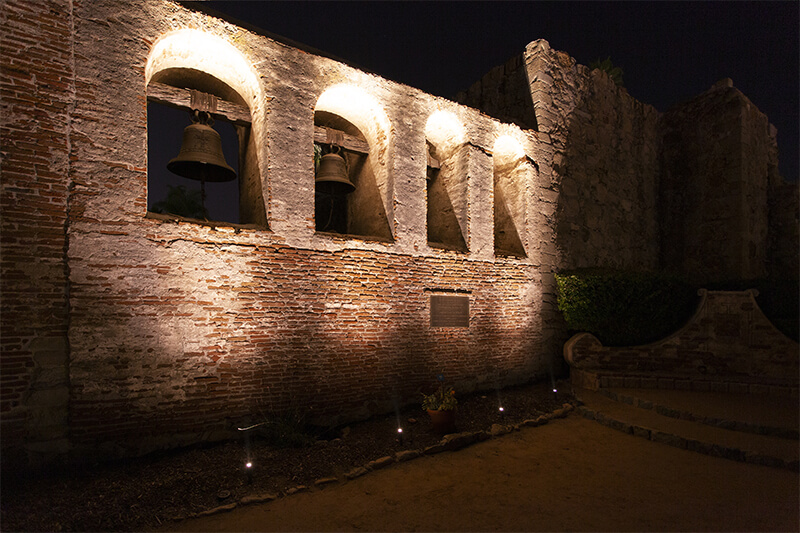 The Original Bell Tower Display lit from 50 feet away by a single tree-mounted Bulletto Mini fixture using a spot optic.

The grounds of the Mission Ruins are a sanctuary; because people were previously buried within the grounds, there are restrictions for running power throughout the space. Because running conduit underground was not an option, low voltage landscape wire was the perfect solution. The surrounding trees are not considered part of the Ruins themselves, and were able to be used to support the fixtures with tree strap mounting assemblies, placed high enough to illuminate areas such as the Original Bell Tower display using a spot optic with a center beam candela at just under 20,000 cd/klm with a throw distance of approximately 50 feet away. A flood optic was used to light the back side of the Swallows Reenactment Wall with a center beam candela of just under 6,000 cd/klm. Because ground stake-mounting does not require much penetration of the surface, Bulletto Mini fixtures were able to be installed throughout the application to light the large facades. Throughout the application, tree-mounted fixtures provided the majority of the illumination to the Ruins while ground stake-mounted fixtures were used to create highlights and accents on the main walls, a great demonstration of the versatility of Bulletto fixtures. 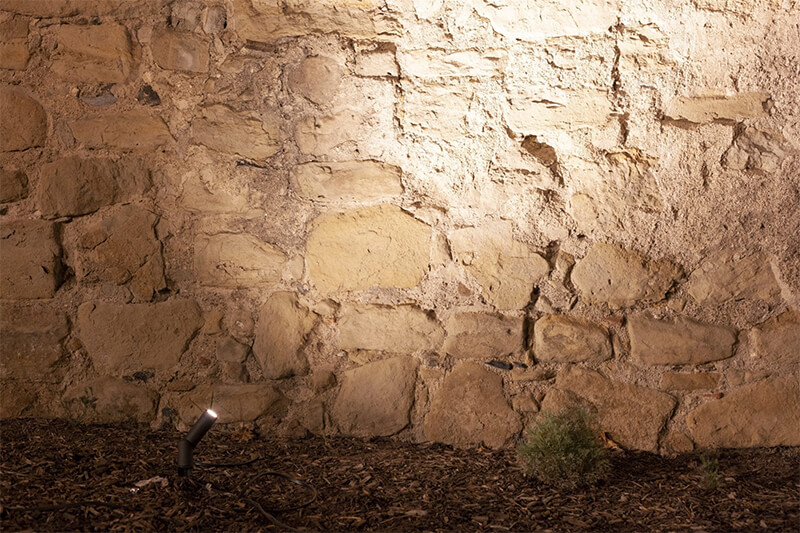